Synchronization of a unit in “black start” and “no unit in operation” conditions: Rusumo hydropower plant can start a unit in “black start” (using Emergency Diesel Generators) and “no unit in operation and switchyard energized” (without using Emergency Diesel Generators). RPCL will follow with due care the implementation details such as phase sequencing, interlocking, trip signal using separated redundant fiber optics link etc. until commissioning period.

Rusumo Switchyard Operation and Flexibility: “The current design of the Switchyard allows for flexibility in the evacuation of power from Project location for the initial period when the three national grids are not yet interconnected and synchronized.
The design permits the power output from any generator to be evacuated through any of the three transmission lines; similarly, the output of two or even three generators could be evacuated through any transmission line. This flexibility would be useful in a variety of possible developments, including non-availability of one or two of the generators, transformers or transmission lines.
However, there is likelihood that it would not be possible to subdivide the output of a single generating unit between two different transmission lines. If one of the generation units becomes unavailable, one option to provide power to all three lines could be to transmit the power from the two available units to different combinations of the two transmission lines over different periods of the day or to feed countries through other existing interconnections among the same countries.
The signed Power Purchasing Agreements (PPAs) for Regional Rusumo Falls Hydroelectric Project, on behalf of RPCL will be amended and completed with provisions that cover such situations”. 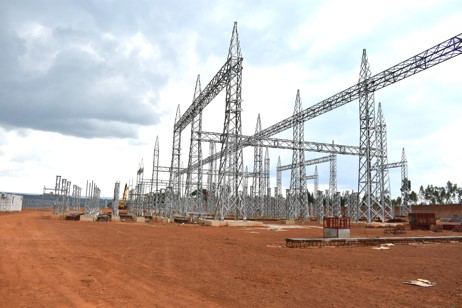 Construction works at the Switchyard

Role of Rusumo Switchyard in a Regional Interconnected Synchronous Network: “The three participating countries confirmed their medium to long-term commitment to establish electricity trading mechanisms and a synchronous multinational network in line with the broader objective of the East Africa Power Pool. Simple trading mechanisms are already operational and could be further developed even before the synchronization of the networks. The role of Rusumo Switchyard is important as a tri-national trading node and it could even become the location of a regional dispatching center.
Technical features for equipping the Rusumo Substations for such future role would be more efficiently implemented before commissioning period and a dedicated area is provided in the Switchyard for such future scope.
However, Project and Company Management advise that the measures needed for the implementation of the future Regional Interconnected Synchronous Network are outside the scope of Rusumo Project.
Indeed, such network includes, in its wider extension, six countries, i.e. DRC, Kenya and Uganda in addition to Burundi, Rwanda and Tanzania already owning the RRFHP.
Hence, it requires a regional control system in regional dispatching center, as well as major interventions on the existing power plants in Kenya, Tanzania and Uganda. Nonetheless, the layout of Rusumo Switchyard was modified to accommodate two buildings: one to be constructed under Rusumo Project for the control of the Switchyard, and a second one to be constructed in the future for a possible regional dispatching center.

Transmission Lines and Substations: Construction of Transmission Lines is financed by the African Development Bank (AfDB) and implementation by Utilities of Shareholders: REGIDESO, REG and TANESCO. RPCL through Rusumo Project envisages construction of three associated double circuit 220 kV transmission lines, each to respective national grids in grids in Gitega (Burundi) for 161km, in Bugesera (Rwanda) for 109 km and in Nyakanazi (Tanzania) for 98 km. Substations will be located respectively in Muyinga and Gitega (Burundi), Birembo and Bugesera (Rwanda) as well as in Nyakanazi (Tanzania); only one circuit of each line will be strung.
The total length of overhead lines is 372 km, of which 118 km is for Rwanda, 94 km is for Tanzania and 160 km is for Burundi (56 km of which will go through the territory of Tanzania). Maximum care in optimizing and settings protection, telecommunication and SCADA will be ensured for efficient compatibility of equipment to be installed in different sites of the project. 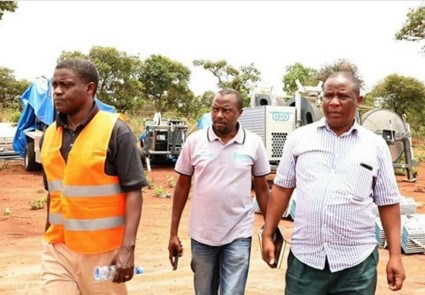 Power Purchase Agreements (PPAs) between RPCL and Shareholders’ Utilities: PPAs will be reviewed in near future, an Operational Committee is being established for that matter to define tariffs indexes, to address technical constraints in sharing the supply in the dry season; scheduled or unscheduled outages; etc. –
Energy generation: it is important to evaluate the average annual energy generation that would result from operating three turbines even at reduced flows in order to supply electricity concurrently to each of the three countries. As such operation would be at lower efficiencies than the option of operating one or two turbines, the average annual energy generation would be somewhat lower. This scenario was likely to be the operating mode until the power systems of the three Countries were synchronized.